We have 365 guests and no members online 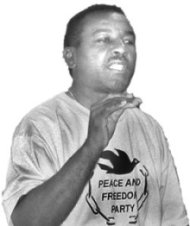 People outside of California can now become Supporting Members of the Peace and Freedom Party, and the California State Central Committee of the party has voted to supply a subscription to the Partisan to dues-paying supporting members in any state.

Stewart Alexander of Murrieta, who was elected State Fundraiser for 2006-2008, has also been appointed as National Membership Coordinator. He and some local volunteers will process supporting memberships, issue membership cards, and communicate with those who sign up. Dues for supporting members have been set at $20 a year, or $10 for students and people with low incomes.

Californians may also become Supporting Members, and some have done so already. Supporting Members nationwide are expected to play an important role in the 2008 Presidential campaign, for which the party has begun a national candidate search.