We have 200 guests and no members online

by Maureen Smith; this article was originally published in Partisan issue no. 25, printed May 2008. 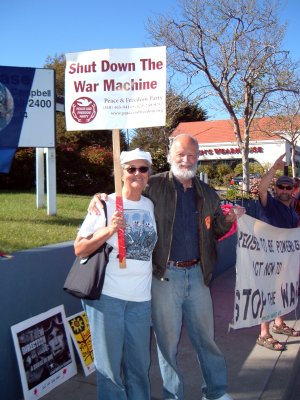 Young men wept openly and asked to be forgiven. A father told of rocking his Iraq veteran son back and forth in his arms the night before he committed suicide.

These and hundreds of others gathered to tell their traumatic experiences, in Iraq, Afghanistan, and the United States at the National Labor College in Silver Spring, Maryland on the weekend of March 14th, 15th and 16th.

Kelly Dougherty, Co-founder of Iraq Veterans Against the War, stated the three goals of IVAW: Immediate withdrawal of all occuppying forces; Full benefits and healthcare for returning veterans; and Reparations and compensation for the people of Iraq.

Antonia Jurasz, author of Tyranny of Oil, told the audience that 2.2 million refugees have left Iraq and the UN cannot send them back due to lack of water. Corporate pillagers Bechtol, Parsons, Halliburton, Shaw, and Perini were named as the recipients of billions of taxpayer dollars without performing. Bechtol completed less than half of its contracts while Parsons, hired to build 150 primary health centers, squeaked by with fewer than 34. She also named the five major oil companies that have signed contracts underwritten by US taxpayers as a way to keep us there indefinitely: Exxon, Chevron, BP, Total and Shell.

Jon Michael Turner, a marine, opened his presentation on a Rules of Engagement panel with "Eat the apple at the core (corps). I don't work for you no more!" Then he tossed his dogtags and medals into the audience. He showed videos of crimes against Iraqis while identifying the circumstances. He ended with "I'm sorry for the things that I did. I am no longer the monster that I once was."

Veteran of three deployments to Iraq, Jason Lemieux, told of the changing rules of engagement from various commanders, including

"Marines viewed rules of engagement as either a joke or a technicality to work around so that they could bring each other home alive." stated Lemieux.

The original Winter Soldier was held in 1971 in Detroit, Michigan. Those Vietnam Veterans Against the War did not have some of the technological improvements that allowed slides and video of war crimes to be presented with soldiers testimony. At least one speaker was at both events. Barry Romo told the audience that 5,000 veterans in Vietnam belonged to VVAW at one time. "It doesn't happen because there's a Martin Luther King. It doesn't happen because there's a Robert Kennedy. It happens because there are hundreds, thousands of Martin Luther Kings. You need organization." He concluded that "Fighting for justice is not going to end when the war ends. Fighting for justice is what makes life worth living."

The grieving families of destroyed soldiers spoke to the lack of healthcare for veterans. In 2005, 120 vets per week committed suicide, while "resources disappear in the dark recesses of Congressional Conference Committees," stated Kevin Lucey, father of Jeffrey Lucey who died from the mental trauma of his experiences in 2004.

Due to the moving accounts presented at this Winter Soldier event, Santa Cruz Peace & Freedom activists were inspired to organize a local Counter Recruitment/ Equal Time in the Classroom group. We wanted to step up our efforts to actually help keep young people from being put in the unconscionable position where these young veterans had been placed. This effort is in its infancy but it is a very longterm commitment.

For more information and to hear and view clips of the Winter Soldier testimony, go to www.ivaw.org and www.warcomeshome.org.