We have 435 guests and no members online

by Partisan Staff; this article was originally published in Partisan issue no. 25, printed May 2008. 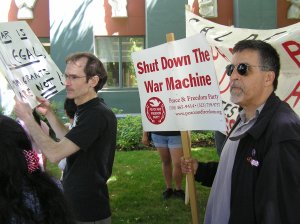 While International Labor Day marchers demanding immigration reform and amnesty crisscrossed Los Angeles and other West Coast cities on May 1, 2008, longshore workers shut down the ports in a coastwise work stoppage to protest the war in Iraq.

Company representatives accused the union of staging the work stoppage to demonstrate solidarity as contract negotiations heat up. Despite carefully-phrased official denials, rank and file members gleefully agreed, and congratulated each other on sending a double message both to the companies and to the Bush Administration.

In 2007 the International Longshore and Warehouse Union planned a work stoppage on May Day, but the ILWU President called it off at the last moment when an arbitrator said the walkout violated the contract. An outcry of "never again" swept the union.

This year, an arbitrator again labeled the walkout as a violation - but the union went ahead with the stoppage.

Some of the dock workers attended the immigration rallies. The Peace and Freedom Party endorsed both the May Day rallies and the May Day port shutdown.