We have 170 guests and no members online

Friday, October 7, 2011 will be the exact 10th anniversary of the U.S./NATO war on the people of Afghanistan. Stand up—Fight Back! Only the people united can make real change!

Download, print and distribute this bilingual flyer The poster displayed below is available in English and Spanish.

The Peace and Freedom Party has endorsed these events.

The San Francisco demonstration will conclude with a march to the Grand Hyatt to support the Unite Here Local 2 strikers. The Grand Hyatt is at Stockton and O'Farrell, by Union Square. 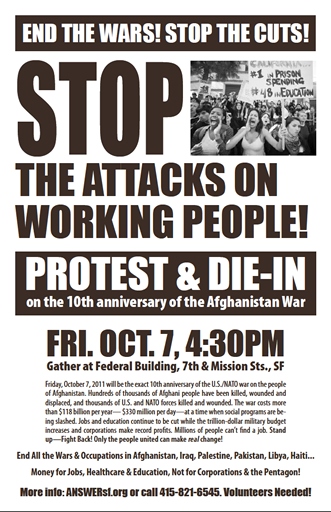