We have 80 guests and no members online

Posted on June 29, 2013 by the Santa Cruz County Central Committee

Join local patriots in the spirit of Bradley Manning and Edward Snowden to call for freedom for All Political Prisoners and freedom from War, the National Security State, Corporate Rule, Drone Strikes, Torture, Guantanamo, Monsanto, Nuclear Power, the Trans Pacific Trade Agreement, Hunger, Occupation, ICE, and Austerity Economics (this list is ever expanding).

The Peace and Freedom Party, and three of our candidates and supporters, are among the plaintiffs in Rubin v. Bowen, a lawsuit to stop the use of Top Two elections in California. The following announcement is reposted with permission from the plaintiffs' website, restorevoterchoice.org.

The requests to dismiss the suit (the technical name is "demurrer") were filed on March 11 by defendant Secretary of State Debra Bowen and by a group of intervenors in the case led by former Lt. Governor Abel Maldonado. We filed our reply on May 21. All of the documents are linked here.

Posted on May 11, 2013 by the Alameda County Central Committee

On Saturday, June 1, the Alameda County Peace and Freedom Party and Movement presents "The Legacy of Stalin."

The Alameda County Peace and Freedom Party and Movement presents

The Legacy of Stalin 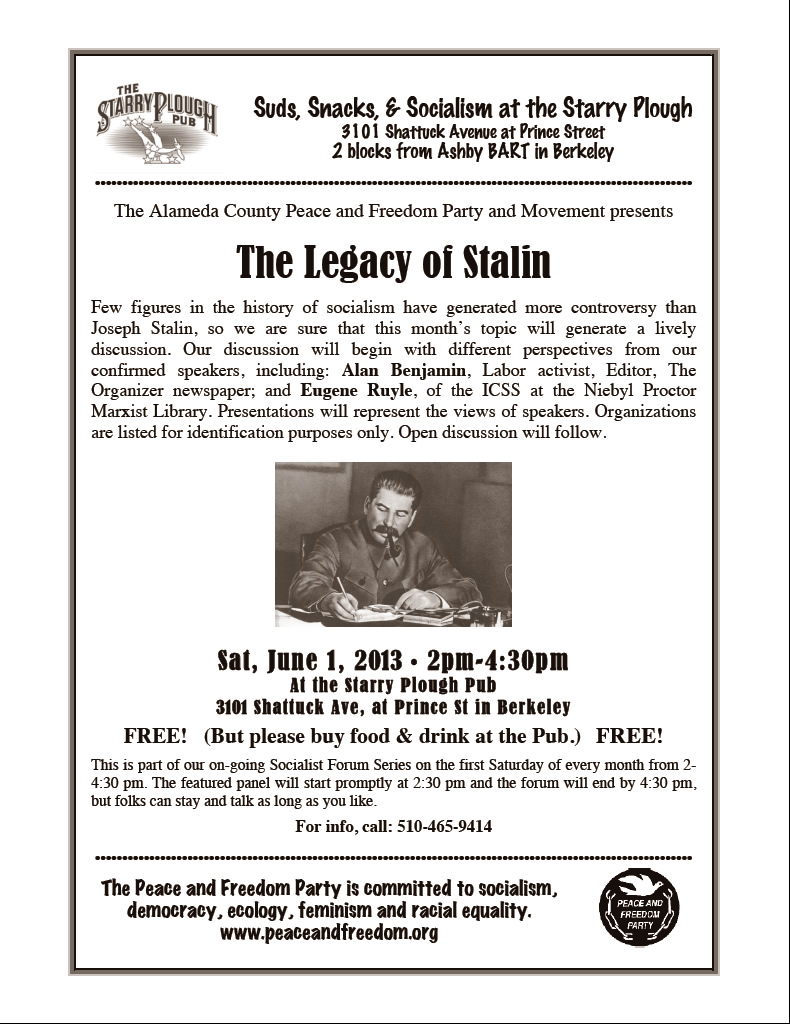 Posted on May 1, 2013 by the Alameda County Central Committee

When: Saturday, May 4, 2013 from 2:00pm to 4:30pm
Where: Starry Plough, 3101 Shattuck Avenue at Prince Street, Berkeley (MAP)
What: Forum on socialism and the LGBT struggle
Sponsor: Alameda County Peace and Freedom Party and Movement
Contact: Gene Ruyle at 510-428-1578 or cuyleruyle - at - mac.com
Cost: free (but please buy food & drink at the Pub)

Posted on February 14, 2013 by the Santa Cruz County Central Committee