We have 142 guests and no members online

Vote NO on Proposition 13, the School and Facilities Bond Measure 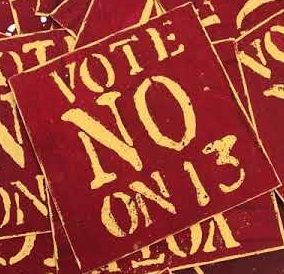 Peace and Freedom Party endorses a NO vote on Proposition 13, a measure appearing on the March 2020 California ballot. PFP is opposed to bond financing because it transfers wealth from working class taxpayers to the rich people and institutions that profit from buying the bonds. While we sometimes abstain on school bonds, this one does not pass the smell test.

Besides the $500 million for charter schools, which we oppose, there is enabling legislation with details not spelled out in any summary of the bill. The passage of the School and Facilities Bond Measure (formerly known as California Assembly bill 48, on the March ballot as Proposition 13) would reduce the fees that school districts can charge developers who profit from new construction of the projects that the new schools will serve. It would raise the amount of bonds that local jurisdictions can issue, thus raising the limit on one of the most regressive forms of taxation.

There is plenty of wealth in the coffers of the extremely wealthy in California. We should tax that wealth sufficiently to pay for our schools and everything else we need.

*Note: A different measure to increase school funding and fix the infamous Prop. 13 of 1978 is collecting signatures to appear on the November 2020 ballot.