We have 292 guests and no members online 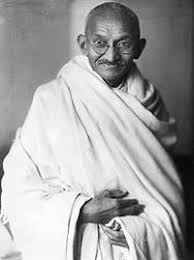 Yesterday, we here in the US were understandably focused on the Twin Towers event of September 11, 2001, but the date has other significance as well: 9/11/1973 was the date that the Chilean military ousted and murdered President Salvador Allende.

But there is also a positive reason to remember the date 9/11, for it not only marks the anniversary of the attacks on New York City and Washington D.C., it also marks the day that Mahatma Gandhi launched the modern nonviolent resistance movement. He called this “Satyagraha.”

The date was September 11, 1906. Speaking before 3,000 Indians gathered at a theater in Johannesburg, Gandhi organized a strategy of nonviolent resistance to oppose racist policies in South Africa. Satyagraha was born and since then, it has been adopted by many around the world to resist social injustice and oppression.

Gandhi used satyagraha in India to win independence from the British. The Reverend Martin Luther King used it in the United States to oppose segregation, and Nelson Mandela used it in South Africa to end apartheid.

Satyagraha is a synthesis of the Sanskrit words Satya (meaning “truth”) and Agraha (“insistence,” or “holding firmly to”). For Gandhi, Satyagraha went far beyond mere “passive resistance” and became strength in practicing non-violent methods.