We have 655 guests and no members online 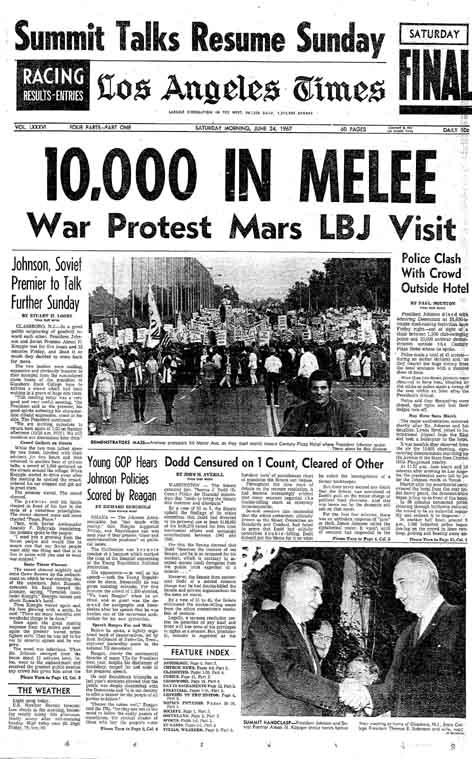 On June 23, 1967, as President Johnson defended his war in Vietnam to a select audience inside the Century Plaza auditorium in Los Angeles, a massive crowd gathered to tell him what Californians thought of his war. As the demonstrators peaceably assembled, a small group of activists guided some of them to a deputy registrar of voters, and the first Californians registered as members of the Peace and Freedom Party.

A little later in the day many of the new registrants were beaten with clubs in the police riot as the demonstration was dispersed, but the Peace and Freedom Party went on to achieve ballot status in California in January 1968 and in many other states later that year.

From a Los Angeles Times retrospective piece of 1997 looking back at the Century Plaza action:

“The significance of the evening lay not simply in the 51 people who were arrested and the scores injured when 500 of the 1,300 police on the scene pushed the demonstrators into, and then beyond, a vacant lot that is now the site of the ABC Entertainment Center.

“Far more powerfully, the Century Plaza confrontation foreshadowed the explosive growth of the national antiwar movement and its inevitable confrontations with police. It shaped the movement's rising militancy, particularly among the sizable number of middle-class protesters who expected to do nothing more than chant against Johnson outside the $1,000-a-plate Democratic Party fundraising dinner and were outraged by the LAPD's hard-line tactics.

“Johnson rarely campaigned in public again, except for appearances at safe places like military bases…”

The Peace and Freedom Party now celebrates June 23 as its birthday.