We have 189 guests and no members online

Thousands of people assembled in and around Berkeley's MLK Jr. Park (Civic Center Park) on Sunday, August 27, 2017. They came to protest and confront an assemblage of far right wing and neo-fascist individuals and groups who had planned to assemble there that afternoon. The left and the liberals were out in force; the other side was virtually absent. 400 heavily armed members of the Berkeley Police Department and cops from surrounding communities guarded an empty “free speech” zone that they had barricaded in the park and kept counter-demonstrators from moving freely around the area.

At a special meeting on August 18, the City Council had adopted an urgency ordinance to authorize the City Manager to issue rules regarding street events without permits “ to protect public safety.” Members of the community --who spoke at the meeting to protest the special power as a potential violation of civil liberties-- far outnumbered supporters of the Council's action. Only one City Council member voted “No.”

The City Manager responded on August 25 with a list of items banned from Civic Center Park on August 27, “to allow peaceful expression of free speech”.

Mayor Jesse Areguin, who had been elected as the liberal choice, made it clear that anyone violating these rules would be subject to citation and arrest. And they were. Between 12:30pm and 12:45pm, this reporter witnessed the arrest of two people just outside the park near the corner of Martin Luther King Jr. Way and Allston Way, presumably for violation of the rules. No action normally considered to be criminal, violent, or aggressive had been committed. 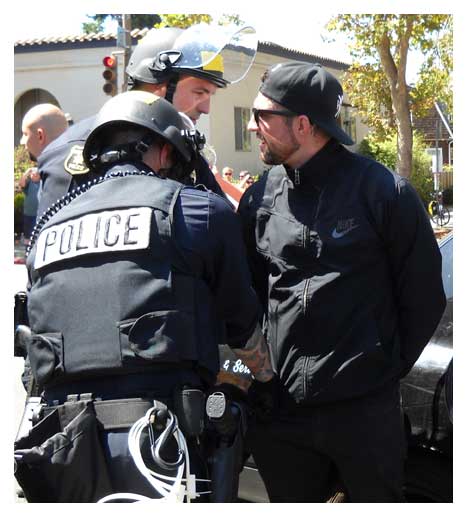 Police searching the pockets of a protester before taking him away.
Photo Credits: Marsha Feinland

The assemblages in and around MLK Jr. Park were the result of several protests organized by groups and coalitions and by people who just wanted to show up to counter the growth of neo-fascism. That morning there were rallies to be held at different locations on the U.C. Berkeley campus. One that had been planned for the campus lawn near Addison and Oxford Streets got shunted to Oxford Street because of barricades around the lawn put up by the U.C. campus police. Many of those demonstrators joined the protest at MLK Park by the afternoon. A coalition of groups met at Ohlone Park, several blocks north of MLK Park, and marched to the main demonstration. And yet another came from the south up Milvia Street on the other side of the park .

It was difficult to count the number of participants because they were restricted to certain areas in and around the park, and separated by police barricades and lines of armed police. But it looked to this observer like 10,000 people showed up to send a message of “No” to fascism.

At around 1:15pm, the police retreated from their stations blocking access to the park to line up across the street near Berkeley High School. People who had been standing outside the park jumped over the barricades freely. Thinking that the protest was over, this reporter went home.

At around 2:15pm, a live news feed showed black-clad demonstrators pursuing and tackling and hitting an individual. The police intervened and led the individual away. In later reports the media highlighted this incident as evidence of violence on the part of counter-protesters. But Shane Bauer, who was on the scene reporting for Mother Jones, documented that the “anti-fa” group was responding because the individual was pepper spraying random counter-protesters (and others) in the park.