We have 275 guests and no members online 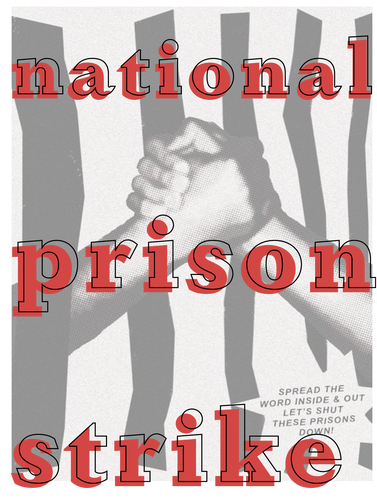 On April 15, a deadly atrocity took place at Lee Correctional Institution, a South Carolina maximum security prison. The jailers intentionally set up what was essentially a gladiator fight, housing rival groups of prisoners together in densely overcrowded cell blocks, locking the gates with no means of escape and turning their backs for hours. It was a setup which led to the death of seven prisoners.

In response to this, a core group of organized prisoners, including a prisoner collective called “Jailhouse Lawyers Speak” which convened the core group, has put out a call for a national prison strike from August 21 to September 19. August 21 is the anniversary of Black Panther Party Field Marshall and prison activist George Jackson’s assassination in 1971. September 9 is the anniversary of the Attica Prison Rebellion, which broke out two weeks after Jackson’s assassination in 1971.

Incarcerated people from at least 17 states have already confirmed their participation. They have asked for solidarity and support from people outside the walls in a number of ways (see more detail below their demands). #Prisonstrike and #August21 are the hashtags being promoted for all solidarity messages and actions on social media outlets.

From the April 24, 2018, press release by Jailhouse Lawyers Speak, posted at the strike’s official website:

“Men and women incarcerated in prisons across the nation declare a nationwide strike in response to the riot in Lee Correctional Institution, a maximum-security prison in South Carolina. Seven comrades lost their lives during a senseless uprising that could have been avoided had the prison not been so overcrowded from the greed wrought by mass incarceration, and a lack of respect for human life that is embedded in our nation’s penal ideology. These men and women are demanding humane living conditions, access to rehabilitation, sentencing reform and the end of modern-day slavery.

“These are the NATIONAL DEMANDS of the men and women in federal, immigration, and state prisons:

“We all agree to spread this strike throughout the prisons of Ameri$$$a! From August 21st to September 9th, 2018, men and women in prisons across the nation will strike in the following manner:

“How You Can Help

For additional background, please see this series of interviews with individuals inside Lee Correctional Institution, one of whom identified as a member of Jailhouse Lawyers Speak, a group of imprisoned human rights advocates.

Prisoners are part of the working class, being forced to work as slave laborers under the most inhumane conditions. The Peace and Freedom Party not only supports their right to organize and strike, but we are for the complete abolition of prisons and mass incarceration, which are tools of capitalist rule and white supremacy. We are for the abolition of all exploitation, wage slavery, and capitalism itself.

In the Bay Area, “The Bay Area Prison Strike Solidarity Committee is organizing a mobilization and call to action on August 25 at San Quentin State Prison, with the objective of raising awareness of the inhumane conditions, treatment and policies that afflict those held in these gulags throughout Amerikkka.”