We have 98 guests and no members online

Peace and Freedom Party Chair: US Troops Out of Syria is a Golden Opportunity

President Trump plans to remove the 2,000 U.S. troops remaining in Syria and the U.S. military and diplomatic communities are predicting disaster. Of course they are, since their imperialist agenda depends on the use of military force. Without those troops, they have no idea how to win friends and influence the course of events. And they could be right about looming disasters. Certainly the Kurds of northern Syria will feel the brunt of increased Turkish aggression. Other dominoes may fall as well, but this is a perfect time to rethink the entire foreign policy of the United States.

The Peace and Freedom Party has long called for an end to U.S. military intervention in other countries and using the resulting military savings for peaceful purposes. We also call for an end to U.S. arms exports. This could be a great time to reorient American foreign policy toward peaceful relations with the rest of the world. Instead of flooding the world with soldiers and guns, we should be flooding the world with doctors, teachers, artists, engineers, and other useful professionals. 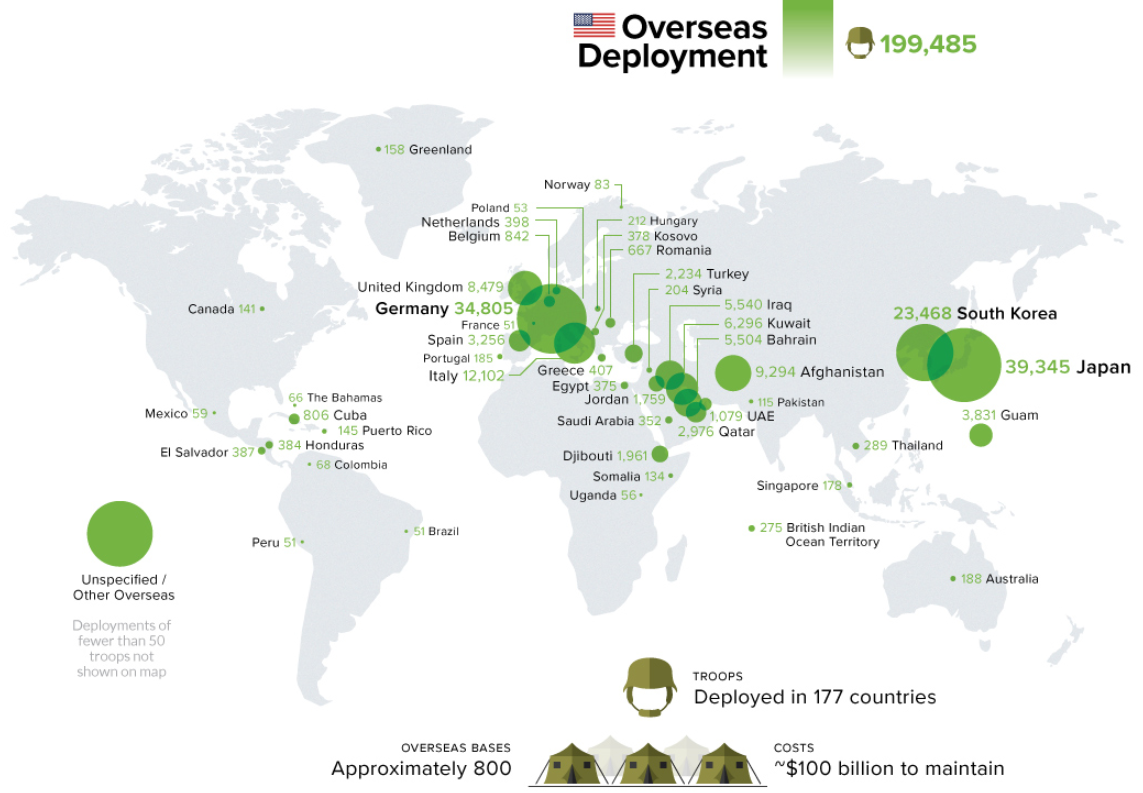 If we Americans want to live in a peaceful, safe, secure world, we first need to stop being agents of war and want and wealthy oligarchs. Yes, bring the troops home from Syria, and Afghanistan – and all the other 100-plus countries where U.S. troops are propping up the unjust status quo. Send out those educators and medical personnel to actually help the people of the world.

Note: The graphic accompanying this piece was originally published on a website called Visual Capitalist and is based on Department of Defense (DoD) statistics from 2015. Note that, at that time, fewer troops were (officially) stationed in Syria than in countries such as Egypt, Hungary and Thailand. For updated statistics, one may consult the Wikipedia page entitled United States Military Deployments, but be advised that these figures do not include troops actually stationed in war zones or participating in combat missions.