We have 152 guests and no members online 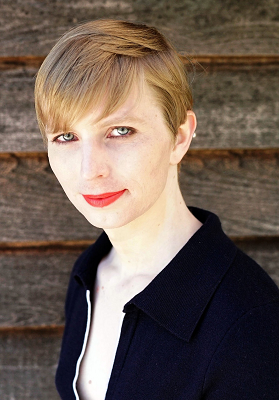 Former Army Intelligence Analyst-turned-whistleblower Chelsea Manning has again been jailed by the U.S. government for refusing to testify before a grand jury, in spite of being granted immunity. This is yet another heroic act by Manning, who beginning in 2010 served six years in military prison for making public war crimes committed by the U.S. government.

This time Manning faces the possibility of detention for as long as the grand jury exists and she refuses to testify.

In 2010, Manning heroically turned over to journalists at Wikileaks hundreds of thousands of State Department documents, chief among them evidence of war crimes committed by the U.S. military in Iraq and Afghanistan. Most well-known among this evidence was the gruesome cockpit video, “Collateral Murder”, which documents the moment-by-moment, illegal killing of unarmed civilians (including 2 Reuters journalists) by U.S. military personnel in Baghdad, Iraq.

U.S. politicians and military officials were furious when, in turn, Western media outlets – The New York Times, ABC, NBC, MSNBC, among many others – widely reported these war crimes.

Rather than investigate its own repeated crimes against humanity, the U.S. government instead arrested and prosecuted Manning in military court, sentencing her to 35 years. Six years later, her sentence was commuted by President Obama, but not before she was tortured in prison, denied medical care while she transitioned, and spent two years in solitary confinement.

Similarly, since 2012 Julian Assange has been forced to remain confined continuously in the Ecuadorian Embassy in London after U.S. officials vowed to seek the death penalty for him, all because Wikileaks publicly exposed U.S. government crimes.

The U.S. has never stopped pressuring other governments to extradite Assange to the U.S. for trial. In fact, this current grand jury – meeting in secret and unaccountable to the public – is simply its latest incarnation.

The U.S. is now attempting to force Chelsea Manning to testify against Assange in order to build a case against him. To her great credit, and in a defiant act of solidarity to Assange, Manning refuses to cooperate, and she’s in prison now for “contempt”. She has said she is willing to go to prison in order to defend the rights of whistleblowers and journalists to expose crimes, especially crimes committed by governments that are only interested in keeping them from the public.

Manning’s current imprisonment raises important questions about Constitutional safeguards of the 4th, 5th and 6th Amendments. For example, “How is Manning in jail again when President Obama pardoned her years ago?” The short answer is: Obama never pardoned Manning. He “commuted” her sentence. And this time the government thinks it’s found a Constitutional “loophole”.

Although there are legal differences between “commute” and “pardon”, in practical terms the result is the same: Manning was let out of military prison and does not have to serve any more of her 35 year sentence.

Previously, she had served six years after a US military court found her in violation of the Espionage Act for “revealing state secrets”. Most working class people, however, understand that the U.S. government jailed Manning in retaliation against her after she had exposed both U.S. war crimes and the government’s additional crimes of attempting to keep this information from public knowledge. In short, Manning was previously jailed for whistleblowing.

This time, however, Manning’s alleged “crime” is “contempt of court,” and she has refused to testify for very important, political reasons.

First, because this is a grand jury, she’s not allowed to have a lawyer present with her should she decide to testify.

Second, unlike being in a state or federal hearing, she’s not allowed to see the questions she’ll be asked ahead of time, so she’s being denied her Constitutional right to prepare a legal defense.

Most importantly, if Manning were to testify again before this grand jury, she’d simply be reiterating testimony she’s previously given during her earlier, military, trial – testimony which this grand jury has access to since it has already been entered into military court records.

Judge Claude Hilton, of the U.S. District Court in Eastern Virginia, plans to hold Manning in jail in order to force her to testify against Julian Assange and Wikileaks. The judge has told her that she will be indefinitely detained, without the ability to appeal this judge’s ruling against her, until she either gives in and testifies, or the grand jury concludes. Grand jury cases like this have dragged on for years, meaning Manning could be held in prison for a long time.

What the government is doing is a classic, anti-working class “catch-22”: as long as she doesn’t testify, she’s jailed. If she testifies, the government will use what she says to build a case against Assange, in order to extradite him to the U.S. and possibly execute him. So, Manning refused on principle, and it is up to us to build support for her release among working and oppressed communities in order to pressure the government to release her immediately.

One last important point to remember about the injustice of this case is that the information the government claims to be seeking -- who was Wikileaks/Assange’s source -- is already public knowledge: Manning was Wikileaks/Assange’s source. Further, the government already has Manning’s testimony regarding Assange and Wikileaks from its previous prosecution and imprisonment of Manning. So this current, very public imprisonment of Manning is simply a ploy by the U.S. government to terrorize future whistleblowers against going public with their information that would benefit the public good, and also a threat to future journalists against protecting the confidentiality of their sources. In short, the U.S. government wants to commit war crimes and not be held accountable.