We have 243 guests and no members online 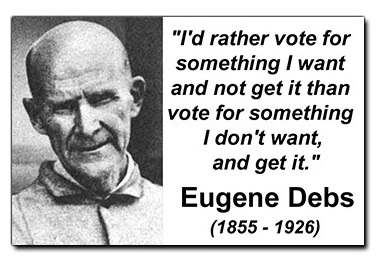 All over the internet, you will find posts claiming that voting for anyone but Joe Biden in November is the same as voting for Donald Trump. Particularly in California, this is a silly lie, and no one should let it go unchallenged.

The United States does not have a national election for President: It has a separate election in each state on the same day, in which each state chooses a slate of presidential electors. A vote in California cannot count against a contrary vote in Wisconsin. Each Californian votes to help pick who will be chosen as the California slate of presidential electors, with the names on the ballot representing the nominee to whom that slate has pledged its votes.

So those who say that your vote for a third-party candidate in California will “help elect Trump” are just telling a falsehood. It can do no such thing. But if you do vote for a candidate who clearly and openly favors socialism, it can do some good – Certainly much more good than giving the Democrat one more vote to add to a margin of millions. Voting for a socialist nominee sends a clear message, and the more votes the louder the message. Imagine the shock it would send through Democratic Party circles if the outspoken socialists Gloria La Riva and Leonard Peltier, who will be the nominees of the Peace and Freedom Party for president and vice president, got a million votes in California!

Big parties are influenced more in their direction by strong forces outside their ranks that offer them a challenge than by defeated candidates within their ranks. Look back at 1933. When the new Congress came into office that year, the Republicans and Democrats agreed that the proposal for Social Security was a “red plot,” a proposal supported only by communists and socialists. (And they were correct.) But as the months went on, the Social Security proposal gathered more and more popular support, and in fear of the masses of people tuning left, when the vote came a majority in Congress went along and supported Social Security. Democrats who had loudly red-baited the proposal early in the year then claimed credit for coming up with the idea!

Joe Biden has stubbornly opposed a single-payer medical system, or “Medicare For All.” And he has now obtained the nomination. Voting for him will do absolutely nothing to help win what we need in a national medical system, even as the need has never been clearer. But the closer on his heels that independent socialist forces tread, the likelier Biden is to go along, against his own desires, with “Medicare For All” if he is elected. The only way you can put that pressure on the politicians in November is by voting for socialists. The more votes Gloria La Riva and Leonard Peltier get in California in November, the more likely California’s congressional representatives will be to support medical care for all, as well as all the other issues the Peace and Freedom Party raises on behalf of working people.

Electoral politics is just a small part of the political action needed to empower working people and disempower the billionaires. But it is one important part of the whole. Make sure your vote goes where it will help, rather than hurt. As the great labor leader and socialist presidential candidate Eugene V. Debs said, “I’d rather vote for something I want and not get it than vote for something I don’t want and get it.”

Don’t waste your vote. Vote for what you want. Vote for socialism. Vote in November for Gloria La Riva and Leonard Peltier.