We have 95 guests and no members online

Vote No on Proposition 20, a scam to perpetuate California’s prison-industrial complex 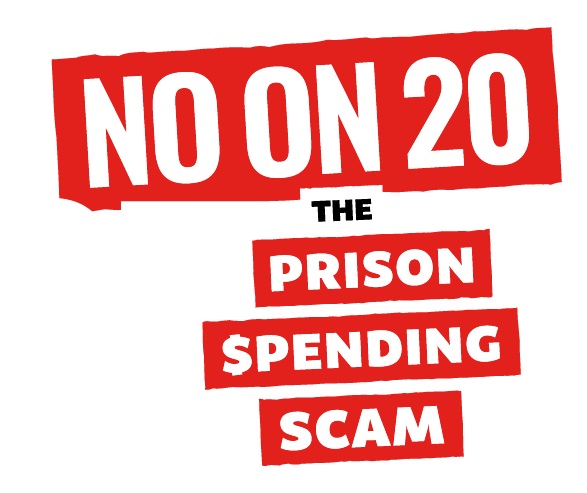 In 2006, California’s prisons were on the verge of collapse. California’s prison population peaked at over 165,000 inmates in 2006 – but the system was only ever supposed to hold 85,000. California’s prisons had become so overcrowded that prisoners were sleeping in hallways and living in tiny holding cells. Riots were breaking out regularly, and the number of suicides increased to astronomical levels.

In 2009, a three-judge court ordered the state of California to lower the number of people currently being held in prison. The court ordered the state to release 44,000 prisoners in an effort to curb the overcrowding crisis. The judges intend to reduce the prison population by 137.5 percent, stating that “until the problem of overcrowding is overcome, it will be impossible to provide constitutionally compliant care to California’s prison population.”

However, the state appealed the ruling to the U.S. Supreme Court. Governor Jerry Brown remained skeptical of the unconstitutionality of the prisons, but those doubts were proven wrong. In May of 2011, the U.S. Supreme Court ruled that California must release more than 30,000 prisoners and reduce the population to a constitutional level. Multiple statewide initiatives to end mass incarceration soon followed. Incarceration rates have steadily declined over the past several years, slowly putting an end to the overcrowding at prisons.

Nevertheless, there is an initiative on the ballot that aims to undo the progress California has made on mass incarceration. Proposition 20 would make specific types of theft and fraud crimes chargeable as misdemeanors *or* felonies, rather than just misdemeanors. This initiative would also make it so “serial crime and organized retail crime” are added in the state code and are made chargeable as “wobblers” – a crime that can be either a felony or a misdemeanor.

Prop. 20 would additionally require people convicted of specific wobbler misdemeanors before 2014 to provide DNA samples for state and federal databases. These wobbler crimes include shoplifting, grand theft, and drug possession.

As of right now, felons convicted of non-violent crimes can be released for parole as soon as they complete their prison sentence on their first offense. Proposition 20 would make it so the parole review board has to consider additional factors – such as age and marketable skills –before deciding on whether or not to release the prisoner on parole. The ballot initiative would also redefine 51 crimes as violent in order to limit access to parole programs.

If Proposition 20 were to be passed into law, correctional costs, court-related costs, and law enforcement costs would skyrocket. The initiative would likely cost taxpayers tens of millions of dollars, reducing funding for other crucial programs and services that benefit society. Prop 20 would lead to drastic cuts in funding for healthcare, schools, and housing. Instead of allocating funds to rehabilitation and treatment, which has been proven to minimize repeat crime, the initiative would cut funding to mental health services and rehabilitation. Prop 20 is a prison spending scam.

Peace & Freedom Party encourages Californians to VOTE NO on PROP 20 in the November election. It’s time that California moves past a failed “tough on crime” stance and progress forward towards a future without mass incarceration.