We have 171 guests and no members online

Posted on April 26, 2011 by the the Website Workers Council

On April 26, Peace and Freedom State Executive Committee member Marsha Feinland was interviewed on the Morning Mix program on KPFA-FM in Berkeley. She explained how taxing the rich and their corporations can solve the state's budget problems and described the Take California march to Sacramento, which will start on May 1. The interview, conducted by Anthony Fest and Adrienne Lauby, is approximately 12 minutes in length.

For more on Take California, see this article and this schedule of events.


Click on the Play button (green arrow) to listen to the interview.

Take California: March on Sacramento Starts on May Day

Posted on April 20, 2011 by the the Website Workers Council

This article is slightly revised from the Take California website, which is published by Peace of the Action. For an up-to-date list of dates and places, click here.

Download and distribute this flyer (print on both sides of letter paper and cut into half sheets).

The Peace and Freedom Party, Peace of the Action (POTA) , CodePINK, Cindy Sheehan, United Progressives, several other entities, and all Vulnerable Folks are calling on us to march, strike, and occupy Sacramento and beyond beginning May Day, 2011.

Your participation and endorsement of this march/strike is paramount to strengthen our approach, our numbers, and our will.

The strike and occupation will follow a march from numerous parts of the state to Sacramento beginning May 1, highlighted by a thematic mass march from San Francisco to the capital led by prominent peace activist Cindy Sheehan, national organization Peace of the Action, Bay Area Code Pink, California Alliance for Retired Americans, Peace and Freedom Party, Veterans for Peace chapters, and several other entities.

Hundreds protest in Sacramento on May 9 -- 68 arrested
including top officials of the Peace and Freedom Party. (Photo credit: ABC News)

Members of the Peace and Freedom Party from Alameda County joined those from Sacramento to participate in a week of action and occupation called by the California Teachers' Association beginning May 9, 2011. We brought 100 signs that said "Tax the Rich and their Corporations." These were eagerly snatched up by rank and file teachers and college students, who did not agree with the CTA's focus on extending the regressive temporary taxes to keep the schools at their present miserable level of funding.

After a day of marching around the streets and an abortive sit-in at 3pm, the teachers and students entered to Capitol building at 5pm. When the majority of participants started a spirited chant of "Tax, tax, tax the rich, we can solve the deficit," The CTA leadership tried to convince the teachers to leave the building. Around 20 teachers, mostly from Oakland and San Francisco, including Oakland Education Association President Betty Olsen-Jones, remained.

Three Peace and Freedom Party State Central Committee members were among the steadfast. Marsha Feinland, who was arrested along with C. T. Weber and Daniel Frederick, gave the followining account.

The article provides links to resources on Code Pink's march to Sacramento, May 1 to May 8, and Peace of the Action's occupation of the capitol beginning May 9. The Peace and Freedom party supports both actions.

Download, print and distribute this Peace and Freedom Party flyer for the march and occupation (letter paper, print both sides, cut in half).

Download, print and distribute the Peace of the Action flyer for the march to Sacramento (letter paper, print both sides, cut in half).

Take California! March to Sacramento, May 1 to May 8

Download, print and distribute the Code Pink schedule for the march to Sacramento (letter paper, print both sides, cut in half).

All out in Oakland on November 2

Posted on October 29, 2011 by the Communications Committee

The Peace and Freedom Party supports Occupy Oakland's call for a mass day of action on November 2. Click on the image below for a flyer to print and distribute. The following description is from Occupy Oakland. 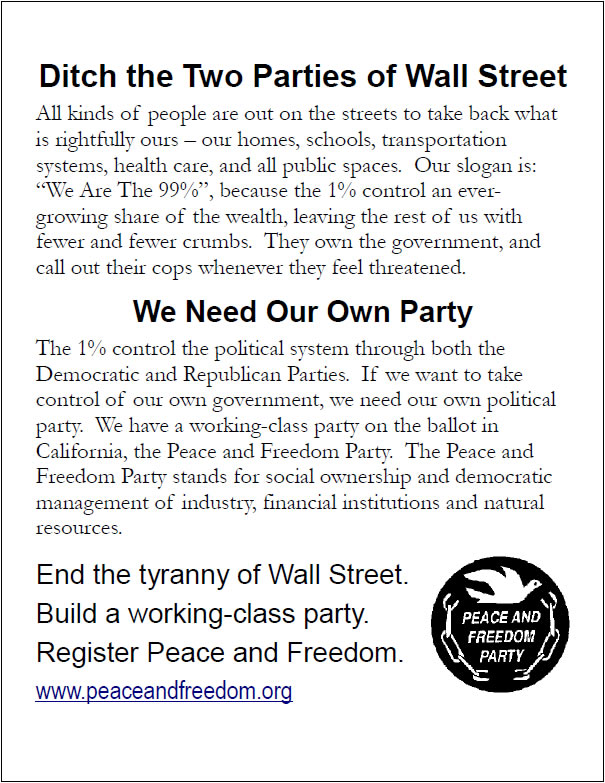 Below is the proposal passed by the Occupy Oakland General Assembly on Wednesday October 26, 2011 in reclaimed Oscar Grant Plaza. 1607 people voted. 1484 voted in favor of the resolution, 77 abstained and 46 voted against it, passing the proposal at 96.9%. The General Assembly operates on a modified consensus process that passes proposals with 90% in favor and with abstaining votes removed from the final count.

We as fellow occupiers of Oscar Grant Plaza propose that on Wednesday November 2, 2011, we liberate Oakland and shut down the 1%.

We propose a city wide general strike and we propose we invite all students to walk out of school. Instead of workers going to work and students going to school, the people will converge on downtown Oakland to shut down the city.

All banks and corporations should close down for the day or we will march on them.

While we are calling for a general strike, we are also calling for much more. People who organize out of their neighborhoods, schools, community organizations, affinity groups, workplaces and families are encouraged to self organize in a way that allows them to participate in shutting down the city in whatever manner they are comfortable with and capable of.

The whole world is watching Oakland. Let’s show them what is possible.

The Strike Coordinating Council will begin meeting everyday at 5pm in Oscar Grant Plaza before the daily General Assembly at 7pm. All strike participants are invited. Stay tuned for much more information and see you next Wednesday.