We have 100 guests and no members online

By Kevin Akin and Marsha Feinland

A drive is underway to register more Peace and Freedom Party voters in California. We need more voters to keep us on the ballot in future years.

But we also need to register more voters into the Peace and Freedom Party because registering PFP is an effective way to send a message to every politician, every day, that more and more Californians reject the two parties of war and big business, and support our pro-working class program. Having your name on the voter list as "Peace and Freedom" is like signing petitions for good causes every day, even when election day is far away. Politicians may pay attention to other things now and then (especially money), but they definitely pay attention to voter lists and voter registration statistics.

Click on the image below to download the Adobe Acrobat (pdf) version of our registration drive flyer. This is formatted for printing on both sides of letter paper, 4 copies per sheet. 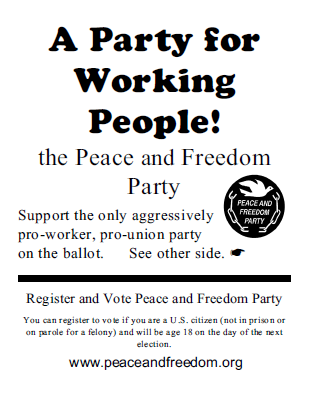 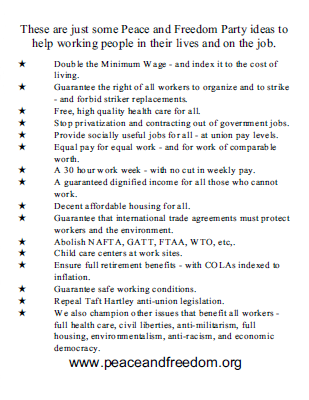 A Special Message From Cindy Sheehan and Friends

Please download this letter and distribute it widely. Click here for a black and white pdf or here for a color pdf.

The 2012 elections brought us more of the same: war and oppression abroad, austerity and repression at home. Across the nation progressive community activists are responding by working at the local level to effect the change we’ve learned not to expect from our elected representatives. A Gallup poll shows that over half of voting age Americans want a third political party.

The Peace and Freedom Party was born of the anti-war and civil rights movements in the 1960s. We have run candidates who have supported reductions in the military budget, single payer healthcare, full employment, and free education as a right. Our activists build local clout and awareness on these issues and more, connecting the peoples movements to electoral politics without knuckling under to the super-rich who control both big parties.

Peace and Freedom is again going national. We are now a ballot qualified party in Florida as well as California, and working toward ballot qualification in several other states, and we are building a national organizing committee.

Due to changes in election law, the Peace and Freedom Party must sharply increase our voter registration numbers from approximately 62,000 registrants to about 105,000 registrants by the end of 2014 in order to stay on the ballot in California. We will do it, but it is a difficult and costly process, and we anticipate raising and spending about 85 thousand dollars on it. If you care about having a voice for peace and economic justice on the ballot, we urge you to help in the following ways:

Please spread this message to your friends. We appreciate any support you can provide. Thank you!

Yours for peace and freedom,

Posted on March 13, 2013 by the Registration, Organizing and Fundraising Committee.

Cindy Sheehan, internationally-known activist for peace and justice, is the lead signer of a letter that kicks off the Peace and Freedom Party voter registration drive in California. The Peace and Freedom Party had over 62,000 voter members last October. Under current state law, after the adoption of Top Two elections, the party needs to raise its membership to around 105,000 by the end of 2014 to retain its ballot status.

"We have already registered about 3,000 more voters since October," says State Chair Kevin Akin, "but we need to step up the pace considerably. With the help of Cindy Sheehan and the other signers of our mobilization letter, we expect to double our registration rate and reach or exceed our goal." The working-class alternative party was founded in 1967, and has run hundreds of candidates for large and small offices, pushing for peace, human rights, and social justice.

Signers of the letter with Cindy Sheehan include Akin, union leaders Mike Roskey and Gloria La Riva, physician Alice Stek, history professor and writer Gerald Horne, attorney Kathleen Williams, satirist Paul Krasner, Veterans for Peace chapter presidents John Reiger of Sacramento and Scott Camil of Gainesville, and television host John Fugelsang. In addition to mailings, the letter will be distributed widely through electronic media. As well as asking for voters to register in the party (a link for doing so is provided in the electronic copies), the letter asks for donations to the registration drive, whose cost is estimated at $85,000.

Click here to read this important message from Cindy Sheehan and friends.