We have 127 guests and no members online

Paying the Price for Peace, September 8 in Santa Cruz

Posted on September 1, 2016 by the Santa Cruz County Central Committee

You are invited to nn evening with S. Brian Willson to see new film about his life and times, Paying the Price for Peace.

When: Thursday, September 8 from 6:00pm to 9:00pm
Where: Louden Nelson Community Center, 301 Center St at Laurel, Santa Cruz (MAP)
What: Film and discussion with the filmmaker
Sponsors: Santa Cruz chapters of Veterans for Peace, Peace and Freedom Party, Code Pink
Contact: email meserve42 - at - gmail.com or meadowwolf - at - baymoon.com
Cost: $5 and up by donation

The Santa Cruz County Peace and Freedom Party is a sponsor of this event.

The Santa Cruz Chapters of Veterans for Peace, Peace & Freedom Party and CodePink invite you to:

an evening with S. Brian Willson
and the new film about his life and times,
and the continued movement for peace and justice around the world!

Many activists in Santa Cruz share part of the history shown in this inspired film - the struggle against the wars in Central America in the 1980’s, the actions at the Concord Naval Weapons Station and the attack on Brian there by a moving freight train that took his legs, the many actions to stop the wars in Iraq, Afghanistan, and much more. We share as well many of the up to the moment struggles that the film illuminates, and the many leaders sharing the path with Brian, like Medea Benjamin and David Swanson.

Brian, with his partner Becky Luening, made Santa Cruz home for a number of years, where Brian was a member of the Bill Motto VFW Post 5888 ("the Post for Peace"), and directed a group called the Veteran's Peace Action Teams (V-PAT) that sent teams of vets to Central America to rebuild communities torn apart by the American funded wars there.

After loosing his lower legs at Concord, and suffering a major brain injury, Brian has recovered to live a luminary and inspiring life, continuing his work for peace, justice, and locally based, petroleum free economies around the globe!

The film runs an hour and a half, and will be followed by a talk and Q and A with Brian.

Poster for Paying the Price for Peace 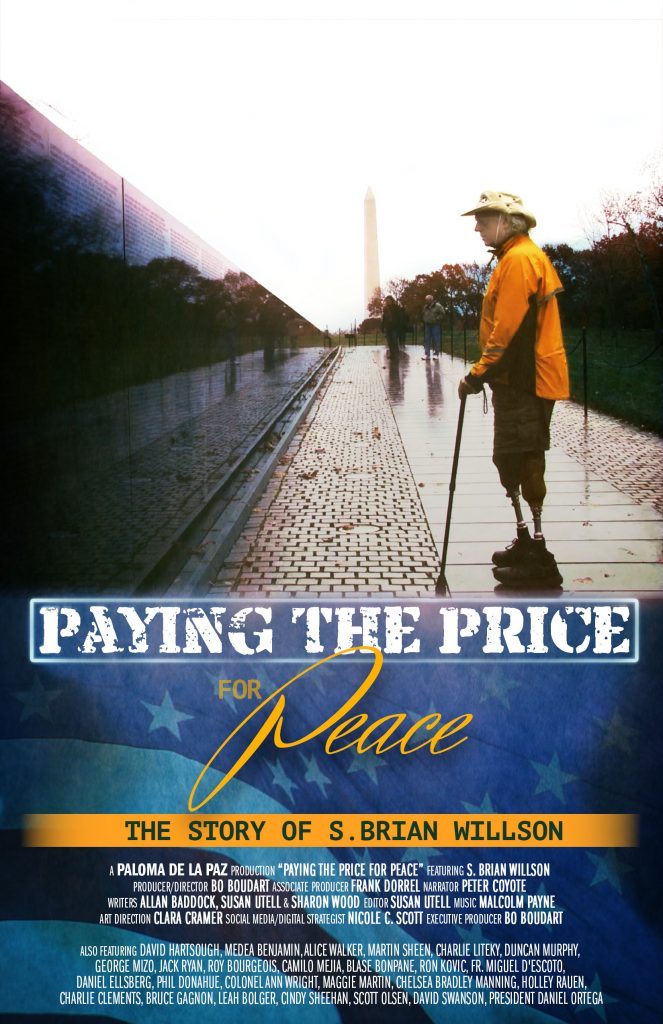