We have 208 guests and no members online

Peace and human rights: one fight 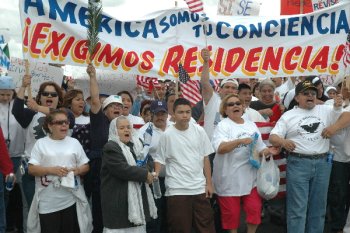 May Day and after, the issues connect

by Kevin Akin; this article was originally published in Partisan issue no. 23, printed April 2007.

Immigrant workers made up most of the crowd in some cities at anti-war demonstrtions in February 2007. Peace activists have been involved in planning and supporting demonstrations for immigrant and labor rights, particularly since the massive rallies on May Day in 2006, and have been involved in planning the May Day rallies in cities across the country in 2007. Increasingly, organizers of marches and vigils are using slogans that connect the struggle against aggressive wars abroad with the struggle for amnesty, legalization and labor rights for immigrant workers at home.

This combination of slogans is not an accident, but results from a real connection between the two struggles, for peace and for human rights. The Republicans in the White House and the Democrats and Republicans in Congress who keep voting to fund Bush's imperial wars also serve the corrupt corporations that profit by division of working people into native and immigrant, "legal" and "illegal," and from divisions by age, gender, language and race. The same corporate owners benefit from war and from exploitation of immigrants. To divide the working class, well financed reactionaries mobilize anti-immigrant fanatics like the Minutemen. An artificial crisis has been created around immigration, serving as a distraction from efforts to unite workers to gain higher wages, increased benefits, and improved safety through union organizing.

Under legislation adopted by both Republicans and Democrats, there is one quick path to citizenship -- joining the U.S. military to fight in Iraq and Afghanistan. A disproportionate share of the U.S. casualties in these wars are non-citizens who have enlisted to gain legal status and citizenship.

According to polls, including the carefully-phrased and twisted polls commissioned by reactionary media corporations, the general population overwhelmingly opposes Bush's wars. A large majority of citizens also support changing immigration policy to welcome those who are working in the United States. But the Republican and Democratic Parties do not represent citizens, they represent their corporate bankrollers.

The Peace and Freedom Party, representing only working people, was the first party on the ballot to endorse the May Day 2007 rallies for peace and immigrant and labor rights. Continuing the linked struggles for peace and human rights, Peace and Freedom Party candidates will be running for federal and state offices in 2008. Meanwhile, the party's activists continue to work for peace, and for amnesty, legalization, and full labor and human rights for immigrants. Join them!