We have 164 guests and no members online

Turning Left: Why I left the Democrats 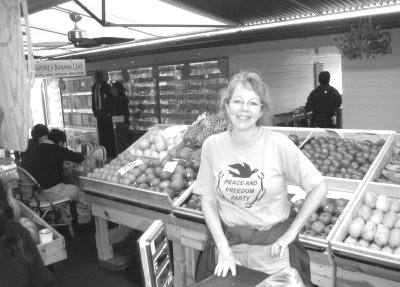 by Debra Reiger; this article was originally published in Partisan issue no. 23, printed April 2007.

Just a few years ago I was still registered to vote as a Democrat. What was I thinking?! I finally woke up to the realization that the Democrats would never represent me, and that progressive change is all but impossible within that party.

Sure, I realized that my views were more progressive than those of my fellow Democrats. And of course the Democratic Party's candidates continued to be pretty disappointing. But I had been registered with the party for a long time, and I still hoped that the party would make some good choices for change. I thought that maybe the Democrats would promote improved democracy by supporting proportional representation (wrong!), or by standing up against the needless killing in Iraq (wrong!), or by supporting immigrant rights (still wrong). I was always disappointed, but figured that there must be some benefit to sticking with one of the two "major" parties.

The deciding event for me occurred when a local special election was called to fill a congressional seat that opened when the elected representative died. In this safe Democrat-controlled district, several qualified Democrats announced that they would run for the office, including two liberals and one progressive. The Democratic Party decided to run a moderate who had not previously held elected office, and pushed the others out of the race. Although twelve candidates from multiple parties ran in that election, the Democrats who could have made a difference were forced out. My political party had taken away my voting options.

I registered Peace and Freedom Party right away. I am so glad to have moved to the party that represents me. I wish I had done it years before. This party stands for the things I believe in and is proud of its positions. It does not take money from lobbyists and big corporations. This is a party that listens to its registrants and represents them. Peace and Freedom Party is a truly progressive voice in the American wilderness.

Debra Reiger quickly became active in the Sacramento County Peace and Freedom Party Central Committee, and then the State Central Committee. She was elected State Chair of the party for the 2006- 2008 term.