We have 64 guests and no members online

Gloria La Riva is a longtime member of the Peace and Freedom Party as well as the Party for Socialism and Liberation (PSL) and has run for U.S. President and California Governor several times with the endorsement of both organizations. She is currently seeking the PFP nomination to run as our party’s candidate for U.S. president in Election 2020.

A recent statement from the PSL which announced a position of critical support for the Bernie Sanders presidential campaign drew the ire of fellow PFP primary presidential candidate Howie Hawkins, who released a response to the PSL statement entitled “You didn’t join the Peace and Freedom Party to support Democrats.”  Gloria La Riva in turn has released a counter-response to that of Mr. Hawkins, and we run Gloria’s statement in full below. 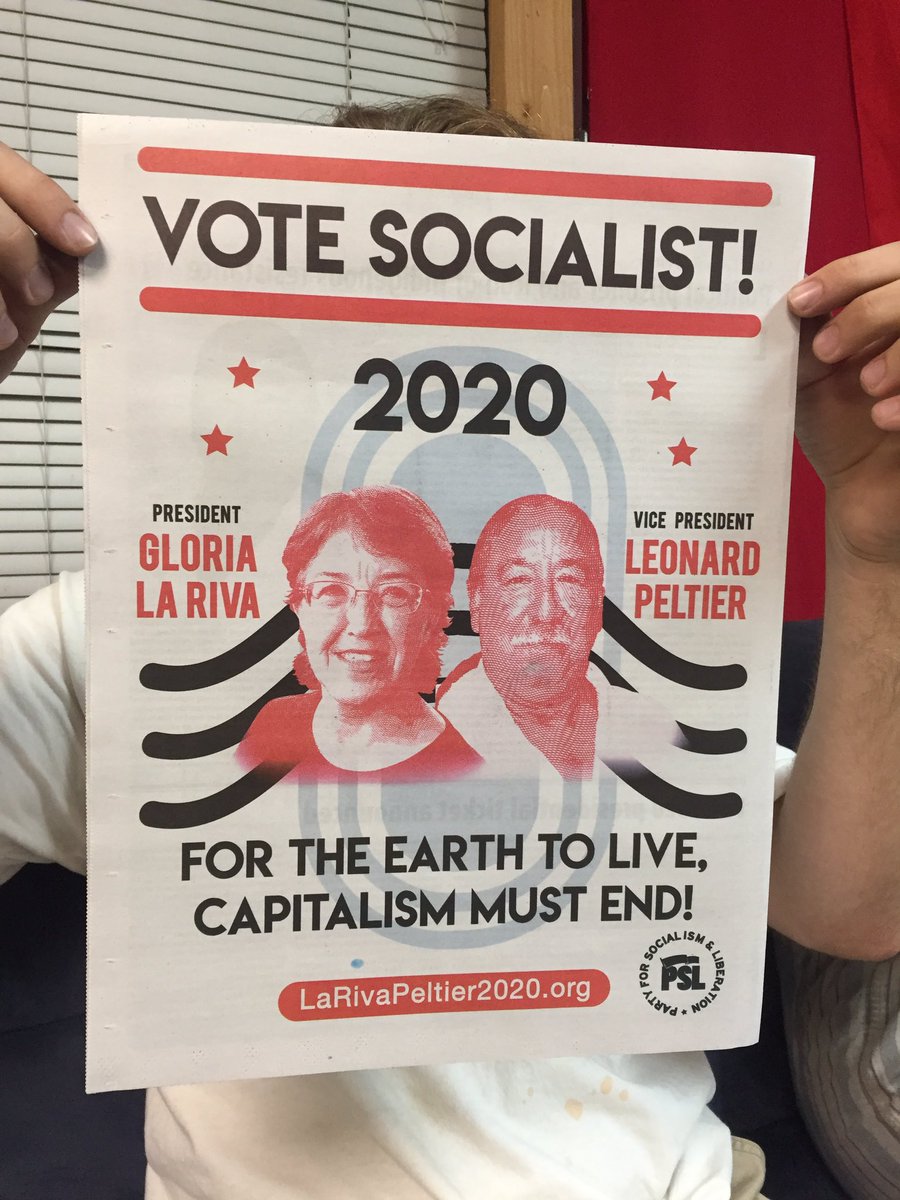 Dear sisters and brothers of Peace and Freedom Party,

I ask for your support and vote in the March 3 Peace and Freedom Party primary. I also urge you to register and vote PFP, as the only socialist party on the California ballot, and which has had a solid program of defending peace, true equality, social justice and socialism since 1968.

I have won the Peace and Freedom nomination for governor of California three times, and was the PFP candidate for President in 2016. I received the most votes for a socialist presidential candidate since 1976.

My vice-presidential candidate is the renowned Native leader and political prisoner, Leonard Peltier, unjustly imprisoned for 44 years. In accepting the invitation to run with me, he said, “I am not only a Native traditionalist, I am a socialist.”

I have been a PFP member since I moved to California in 1981, and always encourage others to register and join. I am decidedly opposed to the Democratic Party as well as the Republican Party, who work hand-in-hand to wage war at home and abroad. Both are imperialist parties that have initiated wars of aggression, genocide and occupation. Both are also responsible for economic policies meant to enrich the super-wealthy at the expense of the working class. The disastrous policies of social service cutbacks, mass incarceration and support for the police can be laid at the feet of Democrats as well as Republicans.

I have helped lead some of the largest anti-war demonstrations, of hundreds of thousands before and during the 1991 Gulf War to the 2002-2003 protests of similar size against the war in Iraq, and also opposing U.S. sanctions that killed more people than the bombings. I traveled for 10 days with former U.S. Attorney General Ramsey Clark in 1999 during the U.S.-NATO bombing of Yugoslavia to protest that war against a sovereign country and documented those U.S. war crimes in the film, “NATO Targets Yugoslavia.” That was under the Clinton administration.

I have long been an advocate of full rights for all immigrants and refugees, including the immediate right to legalize, something that both capitalist parties have refused to support, while millions of deportations and now the caging of children and family separations go on unabated. And of course, there is nothing more urgent than the existential crisis of the environment, and it is clear that only a planned, sustainable socialist system can hope to save the Earth.

I oppose all U.S. forms of aggression, whether sanctions, blockade, coup or war, and call not for a reduction but a dismantling of the genocidal war machine that is the Pentagon, including the shutting down of the more than 800 military bases abroad, and to use those trillions of dollars for the people at home, including reparations for African American and Native people. It is also very important that we represent those who have no right to vote, the millions of undocumented and permanent residents, the prisoners, other disenfranchised people and the youth.

For Howie Hawkins to assert that my campaign is calling for people to support the Democratic Party is not an honest critique. The Party for Socialism and Liberation is offering critical support to the Bernie Sanders movement precisely because it has drawn millions of people, especially newly politicized young people, into a fight against the Democratic Party establishment. Many are saying “Bernie or Bust.” We will not take a dismissive attitude about the eruption of major contradictions within two main capitalist parties; the return of mass socialist politics is only possible if such contradictions grow into major ruptures against the system, and we are working to help that happen.

The struggle between the Democratic Party establishment and those supporting Sanders is developing into a fierce fight that will only intensify. Sanders’s supporters are fighting for important issues that have been absent for decades inside the Democratic Party. They are not buying into the idea being drummed into people’s heads by the media and establishment about electability or “leftist extremism.” Many who are supporting Sanders are seeing for themselves the illusion of the “democratic” process that has held the American people captive for far too long. The rich rulers of this country are terrified not of Sanders as a politician but of the millions who are demanding an end to the status quo, and who are positioned to continue in struggle after the elections.

One of the biggest outcomes is likely to be a “break” from the Democratic Party from many people who are now being propelled into activism and hopefully will continue into independent left politics and the struggle for socialism. This is the opposite of my campaign telling people to support the Democrats.

My campaign is not mincing words nor actions regarding Sanders’ campaign. For instance, I am strongly critical of Sanders’s comments denouncing Venezuela’s president as a “vicious tyrant.” I have been to Venezuela many times and support the Bolivarian process that is struggling against crushing sanctions in its aim to build socialism.

For Hawkins to further imply that he is the stronger supporter of Peace and Freedom is not convincing. Hawkins is already seeking the Green Party presidential nomination, says that the Greens will be on the ballot in all 50 states, and says on his website that his campaign has its “focus on building the Green Party.” To seek the nomination of two parties on the same California ballot doesn’t help either party. I am sure if we both appear on the California November ballot, we will share and support many of the same ideas. But other national candidates have in the past made similar promises to help build Peace and Freedom nationally if nominated, but then were not heard from again after the election.

Whatever the outcome of the Democratic Party primaries, no matter who is their nominee, Peace and Freedom Party will carry out a dynamic campaign to organize and reach out on a program of struggle for our rights in the here and now and for socialism as the only answer to the crises of humanity and the planet.