We have 213 guests and no members online 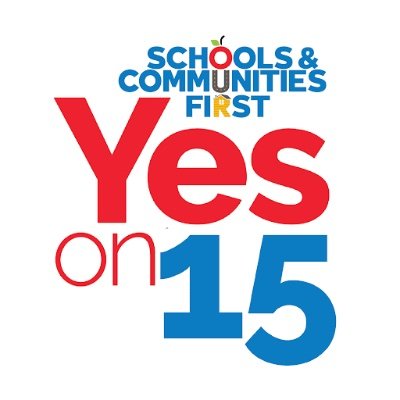 Over 1.7 million Californians signed petitions to put an initiative on the ballot this election which, if passed, would finally close the commercial property tax loophole that has allowed the wealthiest corporations, such as Walmart and Disneyland, to avoid paying billions of dollars in property taxes each year. California Proposition 15, also known as the Tax on Commercial and Industrial Properties for Education and Local Government Funding Initiative, will determine whether to close this loophole and make corporations pay property taxes reassessed at current market rates. This would bring $8 billion to $12 billion more in revenue which would go directly to public schools (40%) and local communities (60%).

Proposition 15 alludes to a commercial tax loophole that has been taken advantage of by corporations for decades since 1978, when Proposition 13 (“People's Initiative to Limit Property Taxation”) was passed. Prop 13 aimed to decrease property taxes by assessing property values at their 1976 value and restricting annual increases of assessed value to an inflation factor not to exceed 2% per year.

These tax cuts were what made Prop 13 widely popular for homeowners across California. However, Proposition 13 included a loophole in which homes were not differentiated from commercial property, allowing corporations like Disneyland to be paying property tax values from 1976 even to this day. For homeowners, every time their property is sold, the property value is reassessed to current rates; commercial property owners can avoid this reassessment provision as well by taking advantage of property transfer loopholes.

As property tax revenue goes directly toward funding schools and local governments, the passing of Proposition 13’s tax cuts in 1978 slashed revenue devoted to these by more than half. To this day, California spends less on its schools than most other states in the country because of this law. California public schools currently rank 39th in spending per pupil, are dead last with the largest class sizes in the nation, and face budget cuts and staff layoffs.

Proposition 15 is needed now more than ever to improve our schools: Revenue from Prop. 15 would allow our local schools to hire more counselors, teachers and school nurses; install up-to-date infrastructure and technology in classrooms; and revive previously underfunded or even non-existent programs such as the arts.

Passage of Prop 15 would also direct more funding toward local governments at a time in the pandemic when housing and rental assistance programs are crucial to prevent an eviction crisis threatening the 40% of California’s tenants who have lost their jobs and/or income. More revenue for local governments is also an absolute necessity under the current climate crisis: California is fighting record heat waves and ongoing wildfires which have displaced over 200,000 people so far this year.

While the wealthiest 10% of corporations try to discredit Proposition 15 by telling the public that it will drive up the prices of consumer goods or affect homeowners negatively, these are outright lies. The facts are that Prop.15 will

Vote YES on Proposition 15 this election to make corporations pay their fair share and bring this revenue back to our communities and schools!